For Children’s Week 2021, the Campbell Cottage Early Childhood Service team held a science exhibition to get the children excited about science and learning. 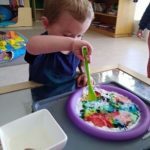 Who doesn’t love mixing baking soda and vinegar and watching it bubble and fizz? And at Campbell Cottage, the educators made it even better by adding some colouring into the mix.

The children took turns using a dropper to drip vinegar into baking soda and watch the colours erupt. The educators took this opportunity to explain the reaction between baking soda and vinegar and expand the children’s vocabularies around colour by naming the colours formed as the bubbles mixed the colouring.

Once the learning was done, the children then got a chance to drop in full spoons of vinegar and make larger bubbles, which was a lot of fun! 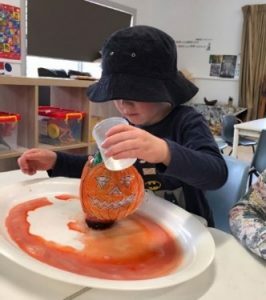 Another fun baking soda and vinegar experiment in Campbell Cottage’s preschool room had a little Halloween twist. The educators and children got spooky and cooked ‘potions’ in ‘pumpkin pots’.

The preschoolers had a fascinating discussion about the chemical reaction involved, using their imaginations to come up with the story that “the pumpkin ate too much Halloween candy and soda, so he puked it all up!” 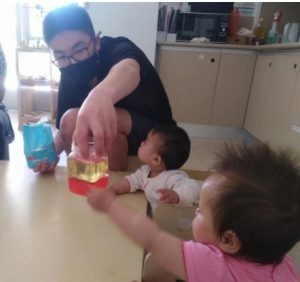 The lava lamp might seem a bit outdated as an item of household décor, but it’s still a great learning opportunity for children.

The educators at Campbell Cottage prepared food colouring, water and oil in a container in advance so that all the children could gather around to watch as the educator added salt.

As the chemical reaction got underway, children passed around the ‘lava’ and watched with fascination and surprised expressions as the red bubbles rose into the oil, then fell back down and popped.

During a reading time, a Campbell Cottage educator was reading the story Who Sank the Boat? and engaged the children in the story by asking them to comment on the animals boarding the boat and imitate the sound that each animal makes. But as they went further through the story, the children started talking about which animal would cause the boat to sink, which led to a discussion on sinking and floating.

The educators at Campbell Cottage embraced this curiosity and helped the children investigate materials/objects that would sink or float. The children collected a range of items from around the room, then put them into a tub of water.

The children were so excited by this learning activity that it became quite loud with shouts of “Sink!” when an object went below the water surface and “Float!” when an object stayed on top. 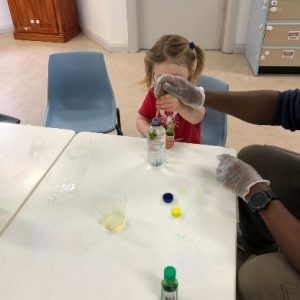 The Campbell Cottage team embraced the children’s enthusiasm and continued this line of investigation later in the week. Using water, cooking oil and food colouring, the team showed children how the liquids mixed and asked the children to make observations about what was happening. The children were fascinated by how the oil initially seemed to sink when poured into the water and then rise above the water surface.