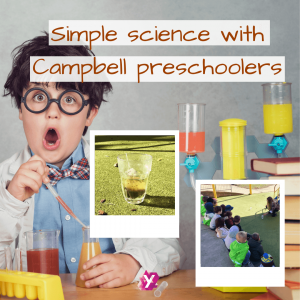 It’s never too early to develop a love of science, and the team at our Campbell Early Childhood Service has been introducing their preschoolers to some simple scientific concepts.

The educators took two glass containers and put water and a teabag in each. Taking the children outside, they placed one container in the sun and the other in shade. They then spoke to the children about the experiment: to see which tea would brew faster.

Rather than telling the children what would happen, they encouraged them to give their own hypothesis on which container would brew faster. The educators were pleasantly surprised when several children immediately called out that it would be the one in the sun, which most of the preschoolers quickly agreed to.

This led to a discussion about why the one in the sun would be quicker, with the children and educators discussing thermal energy (albeit not in those words!).

With the tea still having some time to brew, the educators rewarded the children’s participation by singing some of their favourite songs while watching and waiting.

Finally, the colour difference in the water became pronounced and, as predicted, the one in the sun had brewed faster! Just to check their reasoning was sound, though, the preschoolers made sure to feel the containers and confirm that the one in the sun was considerably warmer.

What a great way to introduce science to preschoolers!